Every human being is a complex mixture of around 100,000 different chemicals and as humans we are eat and are surrounded by vast complex mixtures of additional millions of chemical compounds affecting our daily lives. We define a complex mixture as a mixture that contains too many individual compounds as to allow separation by chromatographic methods (more than 1000 in GC and more than 300 in LC).

Analysing such complex mixtures forms the ultimate challenge of analytical chemistry and life sciences but the rewards will be tremendous. Chemists have by tradition detested such mixture analysis and reduced the world to the analysis of single purified and well defined compounds. Modern mass spectrometry, with its unsurpassed resolution allows, however, the simultaneous analysis of tens of thousands of compounds in a single experiment, which in chromatography are manifested as an unresolved complex hump. In our research we apply novel measurement strategies and data interpretation strategies to study such complex mixtures in food, biological system and environmental samples trying to develop tools allowing an understanding and a chemical meaningful interpretation of data generated from complex mixtures. The steps of our analysis strategy comprise the following steps:

Food contains many different compounds and is clearly a highly complex material. Its complexity increases dramatically if man subjects food to harsh unfriendly conditions such as roasting, cooking, baking, frying, steaming or fermentation.

Examples of our work in the area include the analysis of black tea thearubigins, coffee polyphenols and recent work on cocoa polyphenols. 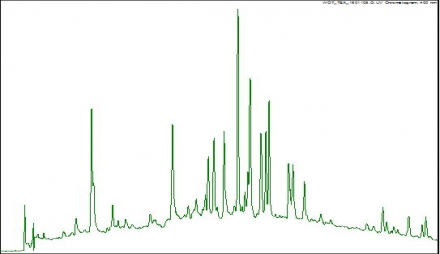 Similar to food, environmental samples are extremely complex. Many analytical procedures introduced by legislative bodies tend to ignore this fact. In an ongoing project we analyse the polyphenolic profile of Rhododendron leaves.