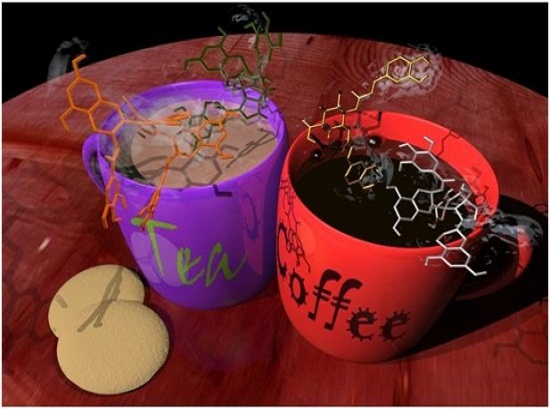 Polyphenols are only second to carbohydrates the most abundant organic compounds on this planet’s biosphere. So they are important. When life emerged out of water onto land, life adapted to unusual new environmental conditions. This was successfully achieved by the biosynthesis of massive amounts and varieties of phenolic compounds acting primarily as efficient UV light screens, thus protecting fragile life from damaging high energy radiation.

In the course of evolutionary adaptation phenolic compounds have been selected in particular by sessile plant organisms to take over a further series of important tasks as response to environmental stresses. These include the following:

Polyphenols are not only crucial for plants, they are equally of enormous importance to humans, due to the high abundance of these compounds in our diet. Estimation of human daily intake of polyphenols varies greatly but including all structural and non-structural compounds could reach a level of 50 g per human per day.

The tenet “Let food be thy medicine and medicine be thy food” espoused by Hippocrates nearly 2,500 years ago, is receiving renewed interest and forms the basic motivation of our work. In particular, there has been an explosion of consumer interest in the health-enhancing role of specific foods or physiologically-active food components, so-called functional foods. Clearly, all foods are functional, as they provide taste, aroma, or nutritive value. Within the last decade, however, the term functional as it applies to food has adopted a different connotation – that of providing an additional physiological benefit beyond that of meeting basic nutritional needs. Overwhelming evidence from epidemiological studies, human intervention studies, in vivo, in vitro assays, and clinical trial data indicates that a plant-based diet can reduce the risk of chronic disease such as diabetes, cardiovascular disease and cancer. In order to put these findings on a sound scientific basis and to reach a position, in which consumer advice can be given with confidence advances in organic and analytical chemistry is urgently required. We need to identify biologically active compounds in the diet in question, provide structure elucidation of the compounds in question and test their biological activity (both beneficial and adverse) once the compounds are available.

Current work comprises the development of novel methods for structure elucidation using mass spectrometry, isolation and general structure elucidation of dietary natural products, synthesis of selected natural products as reference materials and for biological testing and biological testing of dietary natural products in collaboration with many research collaborators. Furthermore techniques for the characterization of crude complex plant materials using mass spectrometry are developed that take advantage of statistical methods in the interpretation of accurate mass data.

Chlorogenic acids (CGAs) are the most important single class of dietary polyphenols. By definition, chlorogenic acids are esters of quinic acid, most commonly characterized by hydroxycinnamate ester moieties. They are consumed at levels of around 2 g per day per human and show excellent bioavailability (meaning they really end up in the blood) if compared to other polyphenols such as tannins or flavanoids.

Chlorogenic acids are ubiquitous plant secondary metabolites and most dietary plants produce this class of compounds, probably selected in the course of evolution as UV-B screens (providing protection between 300 and 350 nm). The majority of plants produce a large number of different chlorogenic acids, many of them being isomers of one another.

The plant producing the largest quantity of chlorogenic acids both in terms of number of compounds and absolute amounts consumed in the human diet is the coffee plant (more than 100 derivatives characterized so far by our research group, with 10 % of the dry weight in a green coffee bean being CGAs and 200 mg CGAs found in an average cup of coffee).

With most plants producing many difefernt chlorogenic acids (between 20 and 100) many of them being isomers, separation and structural chharacterisation of this class of compounds posed a major challenge only 10 years ago with only a handful of derivatives isolated and characterized.

This method has the advantage that CGAs do not need to be isolated but can be identified and their structure elucidated directly from analytical LC-tandem-MS runs, even if present as minor components or as chromatographically close eluting compounds. We observed, that all four regioisomeric mono caffeoylquinic acids and later all six regioisomeric dicaffeoyl quinic acids showed dramatically different tandem mass spectra in the negative ion mode, using an ion trap mass spectrometer (for structures see Figure 1). Due to the diagnostic differences in the tandem MS fragment spectra, a consistent and predictive structure diagnostic hierarchical key for CGA structure elucidation has been established, which allows reliable determination of CGA regiochemistry even for minor component CGAs from tandem MS data exclusively. The basis of these differences in tandem MS spectra was rationalized in terms of different hydrogen bonding arrays found in gas phase ions of regioisomeric CGAs. As a rule of thumb a 1-acyl substituent fragments easier than a 5-acyl substituent and easier than a 3-acyl substituent. A 4-acyl substituent is most difficult to fragment and fragmentation is always accompanied by loss of water. Using this method for the first time aspects of regiochemistry can be assessed using mass spectrometry that lead to an unambiguous and reliable structure assignment.

Coffee makes us severe, and grave, and philosophical.  ~ Jonathan Swift

Cofee is the Germans’ favourite drink and worldwide the third most popular beverage. Coffee contains large amount of polyphenolic compounds being on average the largest contributor to human polyphenol intake in the Western World.

Coffee contains as secondary plant metabolites mainly chlorogenic acids (around 200 mg per cup of coffee). In the green coffee bean we have in the last 5 years identified around 80 different chlorogenic acids with another 30 derivatives found in other parts of the plants. Therefore coffee shows the largest variety of different plant secondary metabolites of all plants studied so far. Additionally coffee metabolites are transformed by food processing to produce in the roasting process many more compounds (we estimate at least 200), with so far unknown structure. Current research is addressing the chemistry of coffee roasting including the identification of compounds formed during roasting and their potential health benefits.

Black tea is second to water the most consumed beverage on this planet. Green tea (the leaves of camellia sinensis) contains a series of polyphenols of the flavan-3-ol class (otherwise termed catechins) being responsible for the various health benefits of the beverage. Black tea is produced from the young shots of camellia sinensis by a process called fermentation (enzymatic oxidation). After rolling or crushing of the green tea leaves oxidative enzymes transform the green tea catechins into a material, which has been termed the thearubigins by E.A. H. Roberts 50 years ago. The chemical nature of this material has evaded structure analysis for more than five decades and constitutes one of food chemistry’s greatest enigmas. We have now published work unraveling the nature of this mysterious material and shown that thearubigins are a mixture of around 30 000 different phenolic compounds with molecular weights below 2 000 Da, obtained by a oxidative cascade, in which catechins are oxidized following three distinct mechanisms to form a complex mixture of a diversity never before observed in nature.

Similar to black tea cocoa powder is produced by fermentation from the flavan 3-ols (otherwise known as catechins) from the raw cocoa pods. Green tea and cocoa pods therefore share the same precursors to produce after fermentation mysterious materials of unknown structure. The difference between the two products black tea is i) the selectivity of the oxidase enzyme, ii) the presence of further compounds (eg tea fermentation is carried out in a wet leaf, cocoa fermentation in a dried pod, cocoa contains large amounts of lipids); iii) Cocoa is after fermentation additionally roasted similar to coffee.

Current work is addressing the nature of cocoa polyphenols after fermentation and roasting.

Polyphenols in Other Food and Herbal Remedies

Next to the main topics of investigation already mentioned (coffee, black tea and chocolate) we investigate as well other dietary and herbal plants rich in polyphenols. Here we are driven by curiosity (eg why do certain plants share the same biological activities) or by the curiosity of my co-workers that bring along their favourite plants from all over the world to analyse them.

Recently we have investigated for example the following plants:

Stevia Rebaudiana (a very important plant due to its naturally occurring sweeteners, which will in the near future have a great impact on the way we sweeten things, which contains plenty of chlorogenic acids)

In order to elucidate the structure of dietary polyphenols and to carry out biological testing we use organic synthesis to obtain authentic reference materials. Therefore we have developed synthetic methods for the synthesis of chlorogenic acids and derivatives. Indeed the combination of analysis and synthesis provides one of the strengths of our research group.

Polyphenols in Food Processing and Metabolism

When looking at the health promoting effects of certain diets, it is unclear whether secondary plant metabolites themselves or products of food processing or metabolism (gut floral metabolism or human metabolism) are responsible for human health benefits. In any case all compounds digested with our diet and arising from our diet need to be evaluated.

Hence current work studies the fate of dietary natural products in food processing and metabolism. Highlights of these works include our work on tea processing (what is black tea) and work on mate roasting.